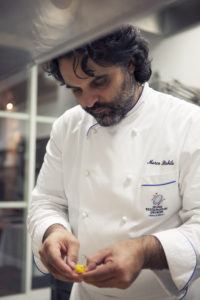 Marco Stabile is a chef and a restaurateur that I have always liked very much, from the first bite in his restaurant Ora d’Aria, which is not the one everyone now knows and applauds near the course of the Arno River. This atypical Tuscan – atypical because he speaks little and does not try to crack a one-liner every ten minutes – once stood in another location, next to the old Murate prison. This continuity led to the name on the sign: Ora d’Aria. A name that for us gourmands has a much vaster significance than the recreational hour so longed for by those in the slammer.What I immediately liked about Marco was the fact that he did not cater to the mass tourism of Florence, which risks being suffocated and choked by too many tourists, or by trying to beat other merchants who rip guests off by administering a poor quality parody of one of the most exalted cuisines of all of Italy.Every course confirmed that there was a thought process behind it, which was always apparent even outside the plate. Stabile embraced half portions when it still was not fashionable to talk about tapas in Italy. Maybe everything started from a marketing campaign. Be it as it may, that tasting menu of half portions was brilliant. Those who wanted to and had a good appetite ordered the full menu, while those who preferred – or were obliged to spare themselves – opted for the half portion menu.Once he opened in Via dei Georgofili, this trace remained in various signature dishes. With a wonderful idea: getting in the game less than a decade ago by participating in a competition to decree the Perfect Steak. It’s not normal for Michelin star chefs. Not only did he participate but he also won. The beauty of it is that because he is a creative person, he shone in the sign of tradition, confirming that the talented ones first learn the alphabet, then the grammar and only then begin to think in an innovative key.L’Ora d’Aria is truly the place of goodness in a city that too often is now is more beautiful than it is good.